The word Sikh means ‘disciple’ or ‘learner.’ The Sikh religion or Sikhism emerged more than 500 years ago in Punjab, in what is now India . It was founded by Guru Nanak Dev Ji First Sikh Guru, Who also teaches us the humanitarian principles of freedom, equality, and justice. Sikhism, the world's fifth most popular religion, is a monotheistic faith that believes in equality " Everyone is the same " and service to others. "There is no distinction, no caste system." as per describe in "Sri Guru Granth Sahib JI " Sikh Scripture. Sikhs consider in three basic morality or principals; meditating on the name of God (praying), earning a living by honest means as well as sharing the fruits of one’s labor with others.

In 1699, the 10th and last living Sikh Guru, Sri Guru Gobind Singh Ji, summoned his followers to the town of Anandpur in Punjab; over 80,000 came. According to history, Guru Gobind Singh appeared before his people, flashed a naked sword, and demanded a head. He repeated his call until five Sikhs volunteered. These five individuals came from different parts of India and from different castes. To these five, and subsequently to many others on that historic day, Guru Gobind Singh bestowed a new discipline, a creed to his Sikhs. The Guru initiated these five in the new order of the Khalsa and then, in a dramatic and historic gesture, they in turn initiated him. On that day, he gave the Sikhs a unique identity which includes five articles of faith:

Guru Gobind Singh also decreed an end to the line of Gurus in human form. The writings of the earlier Gurus were collated along with those of Hindu and Muslim spiritual figures whose teachings strongly resonated with Sikh beliefs. This collection of writings is known as Guru Granth Sahib, a uniquely ecumenical and eclectic collection of spiritual writings. For Sikhs, Guru Granth Sahib is the repository of all spiritual knowledge and authority. In temporal matters all authority rests with the Sikh community worldwide acting democratically and in mindful prayer with an awareness of the spiritual heritage which is embodied in the Guru Granth. Sikhs revere the ten Gurus, Guru Nanak to Guru Gobind Singh, because they delivered the divine word of the one, timeless God. The word “Guru” acquires, therefore, a very special meaning for Sikhs. It is reserved only for the ten Gurus who gave us the divine message and to this message contained in the Guru Granth Sahib. A Sikh sitting behind the Guru Granth selects a random verse called a hukam, which is believed to be the Guru's divine command..

(The first Gurdwara in the world was built by Guru Nanak in 1521-2 at Kartarpur.)
The Sikh place of worship, or Gurdwara, is more than a place of worship. It has historically served as a refuge for the homeless and the destitute. Gurdwaras usually display the Nishan Sahib, a saffron-colored triangular flag bearing the khanda, the symbol of the Sikh faith. Visitors, irrespective of their religion, are offered shelter, comfort, and food. The prerequisites for entering a Gurdwara are removing shoes and covering one’s head with a handkerchief, scarf, or other cloth.
There are four doors into a Gurdwara, known as the Door of Peace, the Door of Livelihood, the Door of Learning and the Door of Grace. These doors are a symbol that people from all four points of the compass are welcome, and that members of all four castes are equally welcome. Every Gurdwara has a Langar attached to it where food is served to anyone without charge. The term Langar is also used for the communal meal served at the Gurdwaras. The food served in the Langar must be simple, so as to prevent wealthy congregations turning it into a feast that shows off their superiority. Although Sikhs are not required to be vegetarian, only vegetarian food is served in the Gurdwara. This ensures that any visitor to the Gurdwara, whatever the dietary restrictions of their faith, can eat in the Langar. The meal may include chapati, dal (pulses), vegetables and rice pudding. Fish and eggs are counted as meat and excluded.

Sikhism is a practical religion and Sikhs are a pragmatic people. The core values of Sikhism are derived from three equally important tenets: An honest living and an honest day’s work, sharing with others what God and life have given, and living life fully with an awareness of the divine within each of us. Sikhism enunciates a philosophical concept termed Miri-Piri, which means living a life with an active, strong sense of commitment to the world and humanity, governed and directed by a strong foundation and underpinning of spirituality. Thus, the Sikh ideal is to strike a perfect balance and integration of these two states of existence. 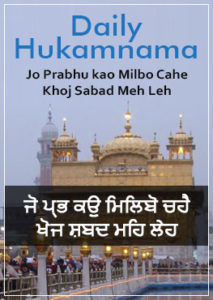